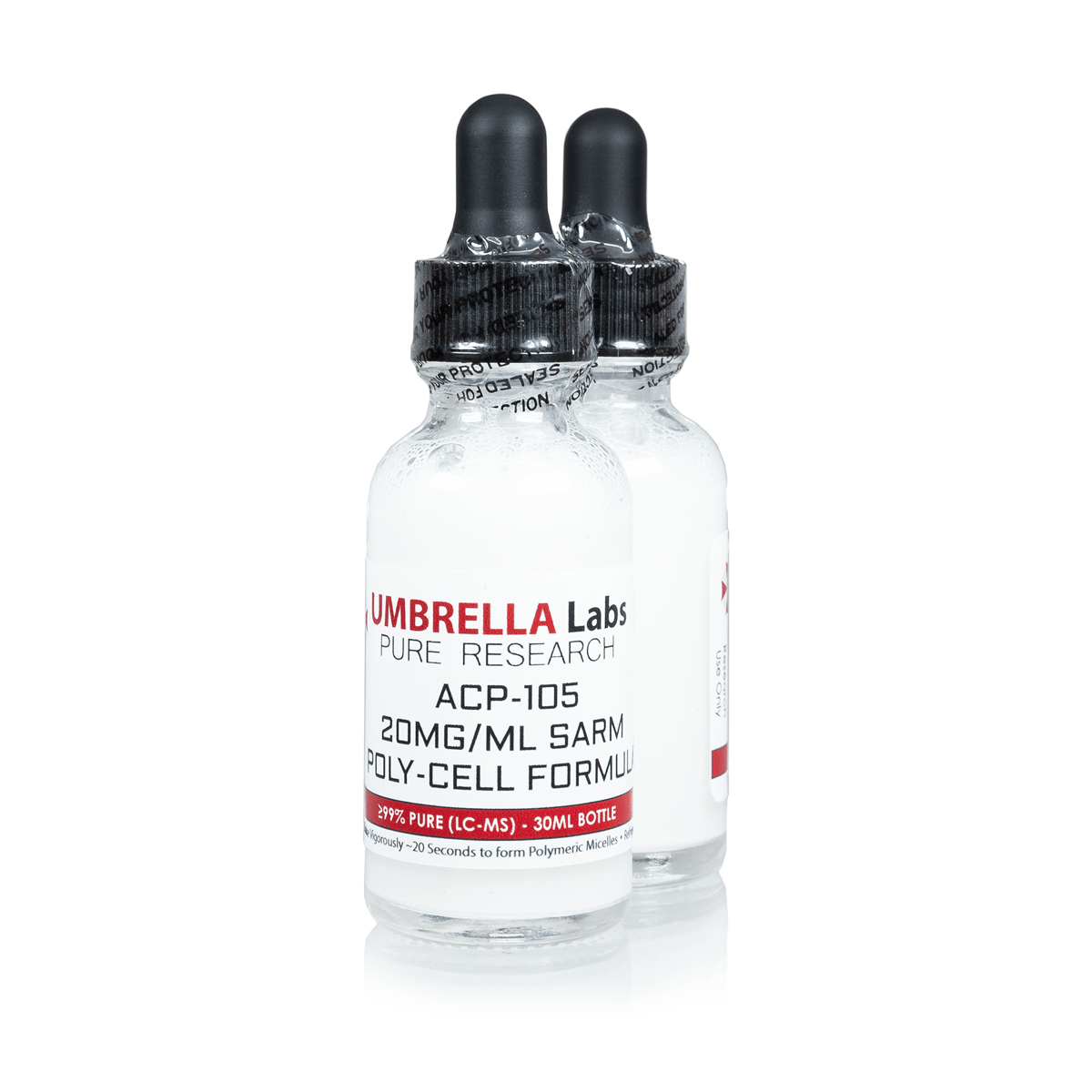 This paper describes the discovery of ACP-105, a novel and potent nonsteroidal selective androgen receptor modulator (SARM) with partial agonist activity relative to the natural androgen testosterone. ACP-105 was developed from a series of compounds found in a High Throughput Screen using the Receptor Selection and Amplification Technology (R-SAT). In vivo, ACP-105 improved anabolic parameters in a 2-week study. In addition to compound ACP-105, a number of structurally related compounds were discovered from the same series which showed blockingactivity of the Androgen Receptor T877A mutant that is involved in prostate cancer growth.

The design of nonsteroidal androgen receptor (AR) ligands with specific pharmacological profiles will expand the clinical applications of androgens in diseases of the prostate, hormone-replacement therapy, osteoporosis, and perhaps even male contraception. Physiologically, AR is predominantly activated by testosterone (T) and its metabolite dihydrotestosterone (DHT). In addition, various synthetic androgen steroidal ligands have been developed for the treatment of, for example, male hypogonadism, muscle wasting, anemia, benign prostate hyperplasia, and prostate cancer. However, the use of steroidal androgens has been limited because of the risk of serious side effects, e.g., cardiovascular events, hepatotoxicity, and the potential of prostatic hyperplasia or cancer [6], [7]. In particular, the lack of discrimination between anabolic and androgenic effects of the current forms of testosterone is of major concern and has driven the search for next-generation SARMs.

Reseachers first tested the metabolic clearance determined in liver microsomes, and the half-life ACP-105 in human hepatocytes was found to be 5.0 h. Pharmacokinetic studies were performed showing high oral bioavailability of ACP-105 in both rats and dogs (rats = 38% bioavailability and dogs = 56% bioavailability). ACP-105 was further assessed for efficacy and selectivity in the stimulation of muscle vs prostate tissue growth in male rats. This pharmacological model has been widely used for the assessment of anabolic and androgenic activities. ACP-105 was delivered via subcutaneous osmotic pumps for 14 days at doses of 0.1-3 (mg/kg)/day. Testosterone propionate was administered at a dose of 0.75 (mg/kg)/day. After 2 weeks of dosing, levator ani muscle and prostate tissues were weighed and compared to those of a control group.

The main finding from this study was that ACP-105 produced a robust anabolic effect on the levator ani muscle (67% reversal of atrophy) while having lesser androgenic effects on prostate (21% reversal vs. 48% for Testosterone alone). Furthermore, to test if ACP-105 was a partial AR agonist in vivo, its ability to reverse the androgenic actions of testosterone was evaluated. Subjects were dosed daily with either testosterone propionate, 1 mg/kg, alone or together with ACP-105, 10 mg/kg oral, for 14 days. Twenty-four hours after the last dosing, the weights of their prostate measured. Testosterone propionate alone produced unwanted androgenic effects in the prostate, yet that effect was lessened by concurrent use of ACP-105.

While tissue specific effects of selective androgen receptor modulators (SARMs) outside the brain have been reported, little is known about brain specific SARMs. In this study, researchers show that ACP-105 upregulate androgen receptor levels in brain following and prevents impairments in hippocampus-dependent novel location recognition and spatial memory retention in animals. Together with the reduced androgen levels in aged men and women and the beneficial effects of androgens on brain function and pathology in Alzheimer’s disease-related models, this study supports the therapeutic potential of ACP-105 for age-related cognitive decline and Alzheimer’s disease.

Reduced androgen levels in aged men and women are risk factors for age-related cognitive decline and Alzheimer’s disease (AD). Ongoing clinical trials are designed to evaluate the potential benefit of estrogen in women and of testosterone in men. Apolipoprotein E (apoE) is important for lipoprotein and cholesterol metabolism and implicated in nerve development and regeneration, neurite outgrowth and neuroprotection [8]. Gene levels of apoE4, a risk factor for age-related cognitive decline and AD compared to apoE2 and apoE3, in apoE4 deficient mice leads to age-related impairments in spatial learning and memory in animals. These impairments are observed in animals that express apoE4 in neurons and other brain cell types. They require apoE4 and are not seen in animals deficient in apoE4. Effects of apoE4 on androgen receptor (AR) function might contribute to these cognitive impairments.

Selective androgen receptor modulators (SARMs) are tissue specific and do not have similar side effects associated with the use of conventional androgens, like testosterone propionate. Effects of SARMs outside the brains have been reported. For example, in multiple animal models, SARMs restored muscle mass, muscle strength and body composition, and prevented bone loss in aged animals, prostate tumor growth, and orchidectomy-induced bone loss. SARMs are also promising for effects in the brain. In this study, researchers tested whether ACP-105 can prevent apoE4-related cognitive impairments.

In healthy elderly men and women, salivary testosterone levels are lower in apoE4 deficient individuals [10].Therefore, stimulation of AR-mediated signaling by SARMs might be particularly valuable in apoE4 deficient individuals. Especially in men, age-related testosterone depletion is a risk factor for Alzheimer’s Disease (AD) and testosterone, and apoE4 deficiency influences the risk of AD [11]. Androgens protect against acceleration of AD-like neuropathology in animals bearing three other AD-related genes (APPSWE, PS1M146V, tauP301) [12]. Thus, SARMs without effects in the prostate would be valuable for development in this field. Therefore, increased efforts are warranted to assess the therapeutic effects of SARMs, especially ACP-105 in particular, to prevent age-related cognitive decline and AD in both women and men.

ACP-105 is an exciting next generation SARM that is being explored for both anabolic effects in muscle and bone in addition to cognitive protection in a variety of disease contexts.

Our Other Available SARMs Products: