Liver stress and hepatic steatosis are intertwined with insulin resistance. PPARs are at the crossroads of these pathways. This study aimed to investigate the effects of GW0742 (PPAR-beta activator) on hepatic energy metabolism and liver stress in a murine diet-induced obesity model. High-fat diets cause individuals to become overweight, show hyperinsulinemia (ie. high insulin levels), hepatic inflammation and hepatic lipogenesis (ie. synthesis of new liver fat), leading to overall liver stress, with structural and molecular alterations, ultimately resulting in cellular death. However, GW0742 prevented increases in body weight and improved glucose tolerance, tackled hepatic inflammation and favored hepatic metabolism versus lipogenesis, thus leading to less accumulation of liver fat. These results are consistent with structural improvements, reducing liver stress and liver cell death in treated individuals. These results indicate that the PPAR-beta/delta activation alleviated liver stress by improving insulin sensitivity and maximizing the hepatic energy metabolism. PPAR-beta/delta activation by GW0742 could be an essential tool to avoid fatty-liver progression and other metabolic disorders.

The pathogenesis of fatty-liver disease and liver stress are closely intertwined with insulin resistance, obesity and inflammation, showing a rising prevalence worldwide (Hotamisligil, 2010; Saponaro et al., 2015). Liver stress is characterized by the formation of poorly folded and unfolded proteins, producing an imbalance between the cellular demand for folding and maturation of proteins, which facilitates the accumulation of unfolded proteins in central cells of the liver (Yoshida, 2007). In this context, the activation of PPARs by novel therapeutics like GW0742 is emerging as a relevant tool to manage liver stress by modulating hepatic energy metabolism and several altered metabolic routes usually disrupted in obesity, but these effects remain to be elucidated (Schuppan & Schattenberg, 2013). This present study was designed to investigate the effects of the treatment with the PPAR-beta/delta agonist GW0742 on hepatic energy metabolism and liver stress in a diet-induced obesity model.

This study demonstrates that treatment with GW0742 reduced body mass, without altering the energy intake, and alleviated the liver stress by improving insulin sensitivity and maximizing hepatic energy metabolism with a shift towards beta-oxidation instead of lipogenesis (ie. fat accumulation). It can be argued that PPAR modulation is an essential mediator of these present findings and PPAR-beta activation seems to be decisive to restore liver homeostasis, with structural liver cell enhancement. This study has major translational potential as PPAR-beta activation could be a promising tool to prevent fatty-liver progression and other metabolic disorders.

Vascular dysfunction plays a key role in obesity-induced risk of cardiovascular disease. The aim of this study was to analyze the effect of chronic PPAR β/δ activator GW-0742 treatment on vascular function in subjects fed a high-fat diet (HFD).

Obesity is a complex chronic disease whose prevalence is rising. Consequently, the prevalence of obesity-related disorders, such as diabetes and cardiovascular diseases, is also rising. The mechanisms by which obesity increases the risk of cardiovascular disease are incompletely understood, but vascular dysfunction seems to play a key role that can subsequently promote the development of atherosclerosis and hypertension. Many factors may impair vascular function in obesity, including changes in blood pressure, glucose levels, insulin sensitivity and fat metabolism [16]. Further-more, obesity is characterized by a chronic immune-mediated low-grade systemic inflammation [17]. Oxidative stress has also been implicated in vascular dysfunction.

In this study, researchers wanted to test how GW-0742 could modulate hypertension and markers of vascular health in the context of diet-induced obesity. The role of PPAR in obesity has been examined by the loss-of-function approach or by using synthetic PPAR activators. PPAR knockout animals are more prone to weight gain on a high-fat diet (HFD), whereas transgenic animals that have overactivated PPAR are protected against obesity and fat accumulation [18]. Moreover, PPAR activators can improve blood-lipid profiles, increasing the levels of good cholesterol while simultaneously decreasing bad cholesterol and triglycerides in obese animals [19] and overweight men [20]. In addition, PPAR has already been shown to regulate glucose levels and insulin sensitivity in various organs and tissues [21]. 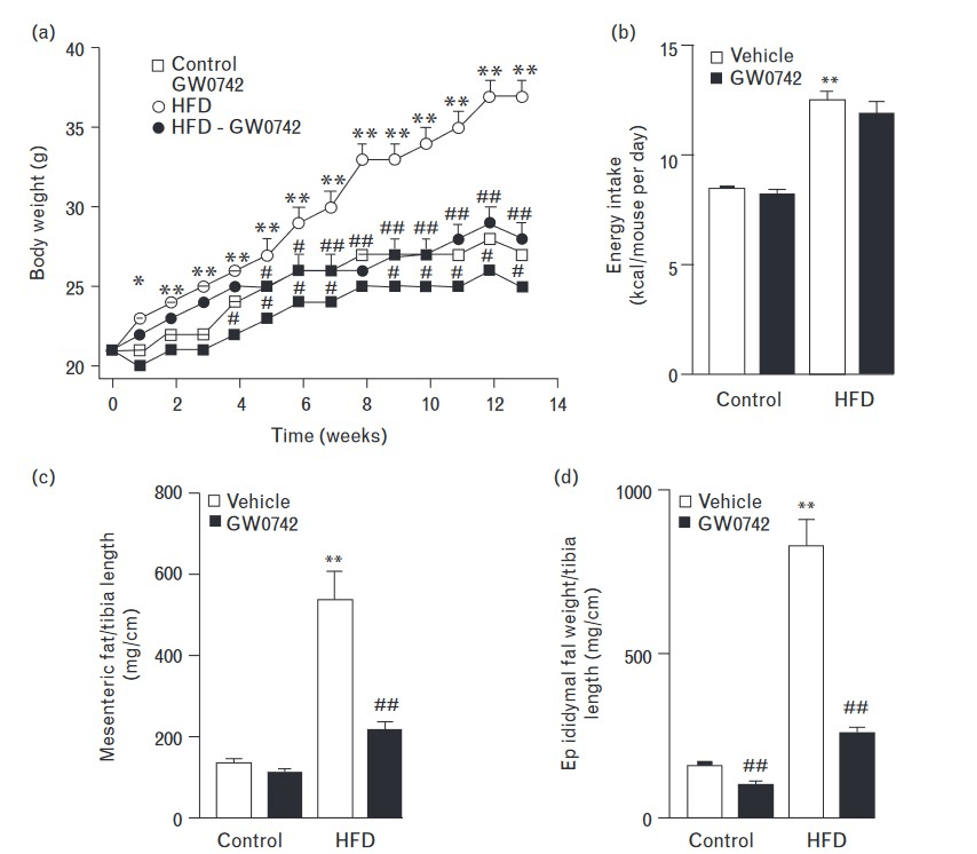 GW-0742 is a promising candidate to enhance liver metabolism and reduce liver stress, act as an anti-inflammatory agent, normalize insulin sensitivity, and reduce neuronal stress. Given the relationship between anabolic supplement use and metabolic disturbances, GW-0742 is an exciting new lead to potentially maximize the benefits of SARMs while simultaneously mitigating their risk profiles.