We utilize an optimized nasal spray formulation developed at Stanford University that overcomes many of the drawbacks of conventional preservative-containing nasal sprays, while simultaneously stabilizing peptides such as oxytocin [1]. Since our competitors do not follow this manufacturing protocol, their oxytocin peptides are susceptible to degradation and/or contamination. 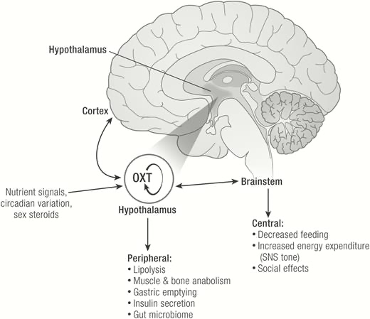 Oxytocin (OXT) has been shown to exert numerous benefits on the body via the hypothalamus and brainstem. Oxytocin has been shown to induce lipolysis (ie. fat burning), anabolic action in muscle and bone, and decreased voluntary eating in humans. Adapted from McCormack et al. Metabolic Effects of Oxytocin. Endocrine Reviews (2019) 41:2 pp 121-145

Over the course of the last 10 years, researchers have begun to uncover the myriad of ways in which oxytocin influences metabolic and neurobiological changes in the body. Ongoing studies are continuing to explore how oxytocin promotes the following:

There is strong evidence that oxytocin acts to maintain weight loss in both animal models and in humans [2], [3]. In fact, the neurobiological action of oxytocin in the reward centers of the brain is well established [4], [5].Specifically, oxytocin has been shown to reduce voluntary sugar intake [6].

The way in which oxytocin acts to reduce caloric intake in humans can be traced to its role as a nutrient status sensor [7]. Part of the reason people eat too much is due to a lack of neurological feedback that tells us to stop eating. Clinical studies employing oxytocin nasal sprays have revealed that once-daily oxytocin sprays in the morning reduces voluntary food intake, leading to fewer calories consumed throughout the day. Consistently reduced caloric intake is the surest way to lose weight, which makes oxytocin a powerful companion to any comprehensive weight loss strategy.

The most commonly adopted treatment for being overweight is lifestyle intervention, yet this is only partially effective, and most individuals who successfully lose weight fail to maintain their weight in the healthy range [8], [9]. Chronic overeating—specifically the overconsumption of high-calorie foods, is a key driver of being overweight. Functional magnetic resonance imaging (fMRI) studies in overweight individuals have demonstrated increased activation of reward-related brain regions (e.g., insula, amygdala, orbitofrontal cortex, and striatum) that drive overindulgence of foods in the absence of a real need for caloric intake, when men and women view pictures of highly palatable foods [10]–[14].

When palatable foods are highly accessible, hyperresponsivity of reward brain regions contribute to the development and maintenance of being overweight [15], and therefore it is sensible to therapeutically target the neurobiological reward pathways involved. Fortunately, fMRI studies have shown that oxytocin nasal sprays decrease unnecessary food intake in humans by correcting faulty nutrient status signaling in the brain (ie. if you don’t need calories you won’t crave calories) [16], [17].

Other similar studies in humans showed that a single morning dose of intranasal oxytocin compared with placebo reduced total caloric intake at breakfast [20], reduced consumption of chocolate cookies [21] as well as chocolate biscuits and salty crackers [22]. In the last study, the test subjects were healthy young men, demonstrating that the weight loss benefits of oxytocin are not restricted to overweight individuals.

In addition to reducing energy intake by limiting food craving and enhancing cognitive control of eating, oxytocin has an important role in modulating energy expenditure and body composition. In fact, multiple studies have revealed that nasal spray oxytocin produced more weight loss than would be expected based on its impact on food intake alone [23].

In a study of diet-induced obesity, oxytocin treatment produced weight loss even when food intake was not altered [24], and numerous studies have also indicated that oxytocin-mediated weight loss is maintained even after its effects on food intake have returned to baseline [25]. This is particularly interesting when you consider that while oxytocin appears to increase resting energy expenditure, it does not appear to directly increase spontaneous physical activity [26].

Contemporary research has started to focus on how oxytocin works with sex steroid hormones to produce anabolic growth in muscle. In overweight individuals, preservation of oxytocin signaling is associated with anabolic benefits for both muscle and bone. On the other hand, when oxytocin signaling declines, as occur in metabolic disorders, insufficient oxytocin leads to adverse effects on both muscle and bone health [27].

Recently, researchers made the unexpected discovery that oxytocin is an age-specific circulating hormone that is necessary for muscle maintenance and regeneration [28]. Further insights came from studies of older individuals, in which the researchers focused on the reduced muscle regeneration and muscle atrophy (ie. sarcopenia) occurring in aging. While it is well known that aging is accompanied by reduced physiological levels of sex steroids, this study revealed found circulating oxytocin level is also reduced in older individuals [28]. Ongoing research is now evaluating how exercise-mediated increases in oxytocin could ultimately contribute to maintaining muscle homeostasis and add to the additional benefits of exercise, including an increased life span and general well-being [29].

Oxytocin administration holds promise for acting in areas that are central to relationship health and functioning. Specifically, oxytocin has been shown to reduce anxiety and stress. In one study, cortisol was reduced following oxytocin nasal spray administration [28]. In another set of studies, oxytocin was shown to mediate a decrease in anxiety associated with sexual activity [30]–[32].

However, it should be noted that under non-sexual and stress-free conditions (and thus low oxytocin signaling), there does not seem to be an anti-anxiety effect of oxytocin. Thus, oxytocin does not seem to play a major role in the maintenance of a basal level of anxiety, but rather comes into play during psychosocial or physiological activation of the neurobiological system.

Oxytocin has been the subject of dozens of clinical trials, and it has been tested in thousands of individuals ranging from children to adults. The safety of nasal spray oxytocin in adults has been extensively reviewed from a collection of studies with over 1500 total individuals [33]. No reproducible side effects have ever been observed in short-term studies of doses of 18–40 IU per day. In at least 1 long term adult study with 59 patients, participants received 40 IU 2 times per day for 13 weeks, representing a large net exposure, yet no adverse effects were observed [34].

In a weight loss study in adults, patients were administered 24 IU of oxytocin 4 times per day for 8 weeks and reported no serious adverse effects [35]. One of the key takeaways from this massive amount of clinical research is the exceptional safety and tolerability of oxytocin, which has further strengthened calls for repurposing it for a variety of health indications. Minor side effects related to nasal sprays in general still apply, including nasal irritation and runny nose. Pregnant women should avoid oxytocin.

In summary, a multitude of studies in animals and in humans reveal that oxytocin, a hormone characterized initially for its role in social bonding, actually has broadly beneficial effects on energy balance. Oxytocin has the capacity to promote weight loss without leading to excess loss of muscle and bone, making it an excellent candidate for inclusion in strategies to promote a lean muscle aesthetic in athletes and non-athletes alike.