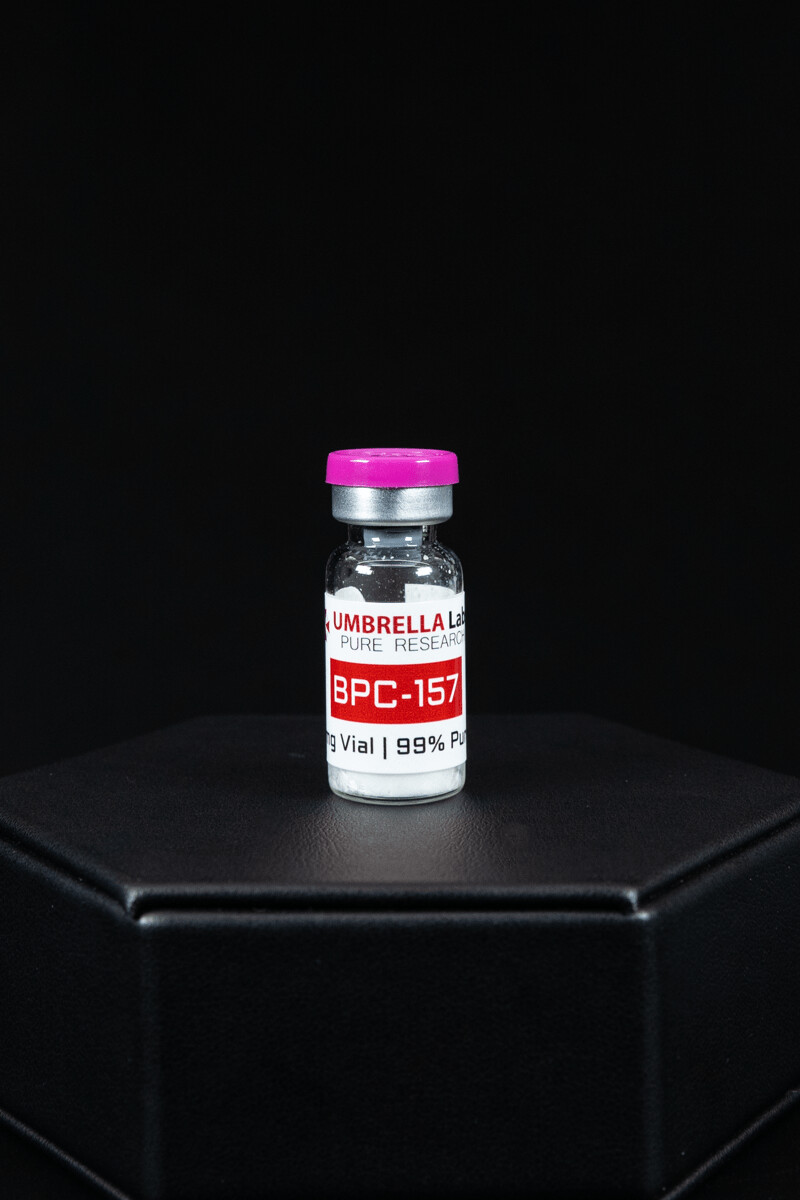 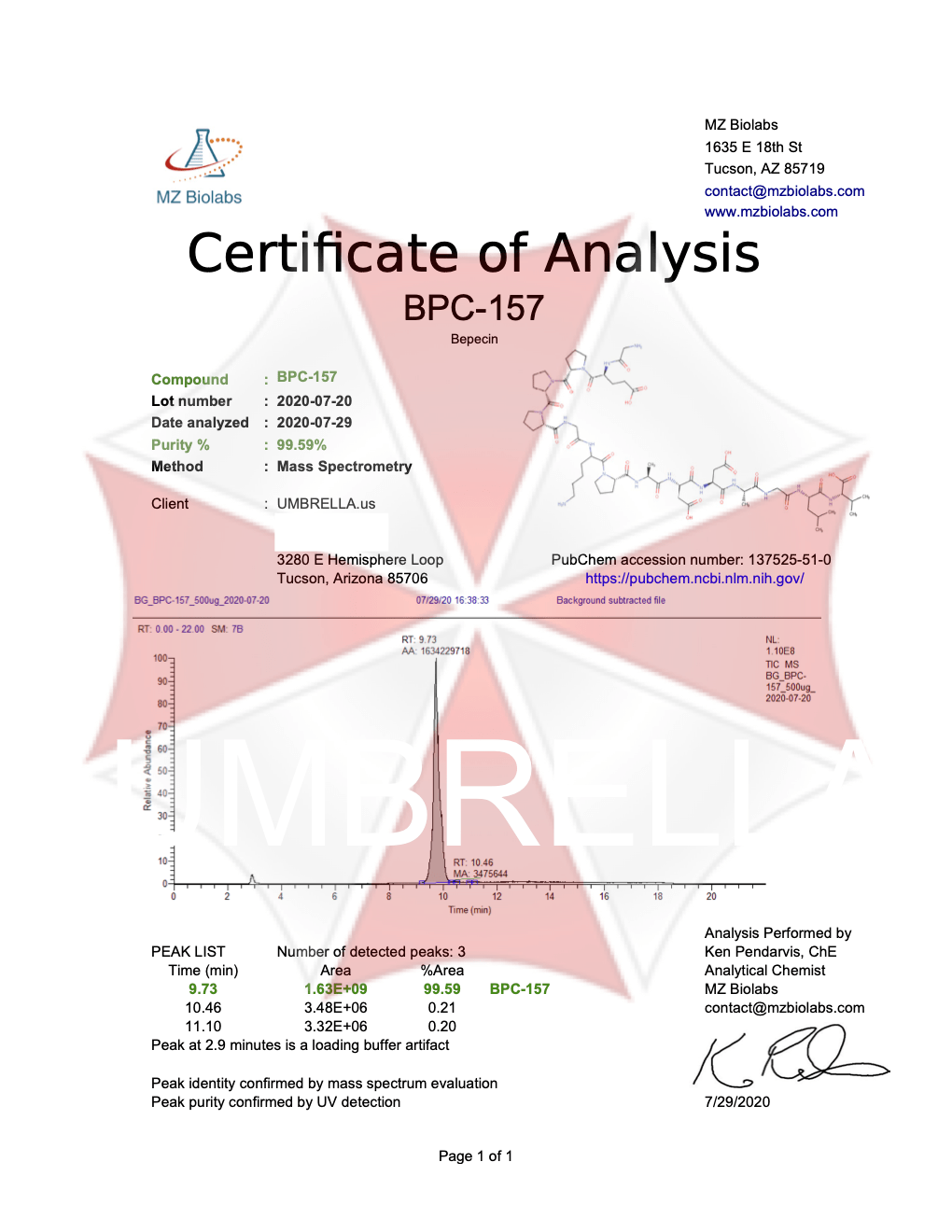 BPC-157 (Body Protection Compound - 157) is a synthetic peptide, derived from a protective protein found in the stomach. Considered a stable gastric pentadecapeptide, it also goes by the names Bepecin, PL-10, and PL 14736.

BPC-157 is a derivative of body protection compound (BPC). BPC is a protein found naturally in the human digestive tract. It plays a significant role in protecting the lining of the gastrointestinal tract from damage, promoting healing, and encouraging blood vessel growth.

BPC-157 is composed of 15 amino acids. It was first isolated from a larger molecule in stomach gastric juice. It is not a steroid or pro-hormone. It's called a peptide because it's smaller than larger molecules, called proteins. Two additional names for BPC-157 are Pentadecapeptide and Bepecin.

Taking the amino acids by themselves will not force the body to make its own BPC protein because we do not make this substance naturally.

Even if you could make BPC-157 (which you don't), simply taking the amino acids that compose the substance, does not mean the body would arrange them into the sequence you want. 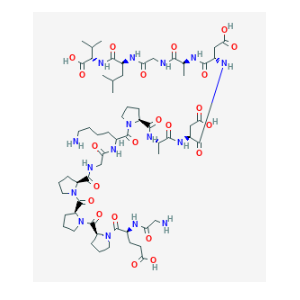 BPC-157 is under active investigation in a number of cell culture and animal models. The peptide shows a great deal of promise not just as therapeutic agent for promoting wound healing and regulating vascular growth, but as a tool for investigating these processes to better understand their control. Research using BPC-157 has the potential to shed a great deal of light on angiogenesis in particular, a process that is not only critical to wound healing, but that plays extensive roles in growth, cancer development, and embryogenesis.

Our BPC-157 is stored and handled according to industry guidelines to ensure stability.

Reconstitution is required prior to use.

While marketing seems to mostly deal with benefits to helping heal tendons and joint pain, a variety of studies have hinted BPC-157 may have a wide range of effects including:

BPC-157 is demonstrated in research studies, via interaction with the Nitric Oxide (NO) system, to exhibit an “angiogenic” wound healing effect and protect endothelial tissue. It is also shown to improve mobility, strength, and flexibility in joints and connective tissue.

However, the vast majority of these BPC-157 benefits involves lab animal research and not humans.My experience with BPC-157 has been healing big to small injuries hamstrings/broken spiral fractured leg to elbow and shoulder tendons.

The natural function of BPC in the GI tract is to maintain the integrity of the mucosal barrier that protects underlying tissues from the harmful actions of gastric acid, bile, and other compounds necessary for digestion and absorption of nutrients from food. At least part of this function is mediated through the recruitment of fibroblasts. BPC-157 has a dose-dependent effect on the spread of fibroblasts in culture and in vivo, causing the cells to both proliferate and migrate faster. Fibroblasts are integral to wound healing as they are the cells responsible for laying down extracellular matrix proteins like collagen, fibrin, elastin, and more.

BPC-157 is a potent angiogenic factor, increasing the rate at which endothelial cells (the cells that line blood vessels) proliferate and grow. Research in rats shows that the peptide substantially increases the rate of collateral blood vessel growth in the setting of ischemia. While this effect has been primarily observed in the GI tract, there is evidence for similar benefit in cardiovascular, neurological, and muscle tissues, suggesting that BPC-157 may be used as both a therapy in the setting of stroke and heart attack as well as a probative peptide for understanding how to promote healing following ischemic injury. Studies in chicken embryos suggest that at least part of the mechanism by which BPC-157 promotes vascular growth is through the stimulation of VEGFR2, a cell surface receptor active in the nitric oxide signaling pathway. VEGFR2 is thought to play an important role in endothelial cell growth, proliferation, and longevity. 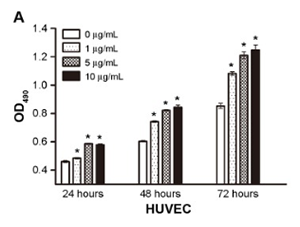 Cell culture research has effectively demonstrated vascular “running” secondary to BPC-157 administration. Vascular running is the process by which vessels grow toward an area of injury or around an area of vascular occlusion to reestablish blood flow to distal tissue and protect cell function. This particular function of BPC-157 may make it possible to develop an effective oral treatment for slow-growing arterial occlusions, such as are seen in atherosclerotic heart disease. This area of research may one day render unnecessary surgical interventions such as stenting, coronary artery bypass grafting, and more.

Given its roles in fibroblast recruitment and blood vessel growth, it should come as no surprise that BPC-157 has shown positive findings in animal models of tendon, ligament, bone, and other connective tissue injuries. Tendon and ligament injuries are slow to heal, in large part, due to poor blood supply in these tissues. Poor blood supply slows the rate at which fibroblasts and other wound-healing cells can reach the area of injury and, ultimately, restricts the overall level of repair that can take place. Both in vitro and in vivo research involving rat tendons has shown that BPC-157 promotes collateralization and boosts fibroblast density in the setting of tendon, ligament, and bone injury. This research indicates that BPC-157 is more effective than bFGF, EFG, and VGF hormones in promoting healing in these tissues.

Experiments using FITC-phalloidin staining have revealed that BPC-157 is a potent stimulator of F-actin formation in fibroblasts. F-actin is critical to cell structure and function, playing an important role in cell migration. Analysis via western blotting indicates that BPC-157 increases phosphorylation of paxillin and FAK proteins, which are critical proteins in the cell migration pathway.

Research in rats has shown that BPC-157 can neutralize certain oxidative stress markers like nitric oxide and malondialadehyde (MDA). This makes BPC-157 a powerful antioxidant, a property of the peptide that is further supported by research showing that it can reduce the production of reactive oxygen species in the gastrointestinal tract. Research investigating whether modified lactococcus lactis bacteria can deliver BPC-157 to the GI system shows that the bacteria increases levels of the peptide dramatically in cell culture.

Counteracts The Side Effects Of Drugs

Often, the limiting factor in medical pharmaceutical use is side effects. NSAIDs, like ibuprofen, for instance, cannot be used for long periods of time because they increase gastric bleeding as well as the risk for heart attack. The ability to counteract side effects while leaving desired effects intact is a holy grail of modern medical research as it would improve therapeutic benefits for a number of drugs. BPC-157 has been found to counteract side effects of NSAIDs, medications used in psychiatric conditions, and a number of heart medications.

It should come as no surprise that BPC-157 helps to prevent many of the GI side effects that certain drugs are known for, but it is less intuitive that the peptide also protects against side effects in the brain, heart, and other tissues. Research in rats, for instance, shows that BPC-157 can protect against QTc prolongation in the heart, a condition that can lead to serious and even fatal arrhythmias. QTc prolongation is caused by drugs used to treat diabetes, schizophrenia, and other psychiatric conditions. Similarly, BPC-157 has been shown to prevent other side effects of psychiatric medications, including severe side effects like catalepsy and somatosensory disturbance. This later benefit may make it possible to more adequately treat psychiatric conditions, which are notoriously difficult to treat, in part because patients often discontinue their medications secondary to severe side effects.

Colony collapse disorder (CCD) is a syndrome in which entire colonies of honey bees experience rapid decline and, eventually, complete destruction. Causes of the condition are not fully defined, but at least part of the problem can be contributed to an infection in honey bee guts by the fungus Nosema ceranae. By supplementing the food that honey bees eat with BPC-157, researchers have shown a reduction in the damage the fungus causes in honey bee GI tracts and a concomitant increase in hive survival rates. These trials were carried out in natural field settings and offer the first significant oral treatment for reducing the impact of CCD on the most important pollinator for most food crops.

BPC-157 is being actively researched for its ability to promote tendon and muscle healing via induction of angiogenesis. It may also inhibit systemic inflammation and protect against xenobiotic toxicity. Suggested dosing guidelines for preclinical research are as follows:

Keep peptide vials refrigerated at all times to reduce peptide bond breakdown. DO NOT FREEZE. Most peptides, especially shorter ones, can be preserved for weeks if careful.

Always swab the top of the vial with an alcohol wipe, rubbing alcohol or 95% ethanol before use.

Before drawing solution from any dissolved peptide vial, fill the pin with air to the same measurement you will be filling with solution, ie. if you plan to take 0.1 ml, first fill the pin with 0.1ml of air, push the air into the vial, and then draw the peptide back up to the 0.1 ml marker. Doing so will maintain even pressure in the vial. Always remember to remove air bubbles from the pin by flicking it gently, needle side up, and pushing bubbles out. In addition, push out a tiny amount of solution to ensure there is no air left in the metal tip.

The purity and sterility of bacteriostatic water are essential to prevent contamination and to preserve the shelf-life of dissolved peptides.

Push the pin through the rubber stopper at a slight angle, so that you inject the bacteriostatic water toward the inside wall of the vial, not directly onto the powder.

STORE DISSOLVED PEPTIDES IN AN AIRTIGHT ZIPLOCK BAG IN THE FRIDGE

Ideally, refrigerate vials in an airtight environment, ie. a ziplock bag that you’ve sucked the air out of before sealing.

Due to a lack of clinical guidelines, safe and effective dosages and dosing schedules for humans have not been defined. This is a research product.